I've been finding it harder to get into our local library, partly because it's incredibly time consuming just getting through the front door with a 3 year old who insists on dressing himself (I'm a patient woman, but watching him grapple with socks is fist bitingly s-l-o-w) But it's mostly hard to get to the library because it's closed down. That definitely makes it harder. Don't even get me started, I'm fuming! And our previous book buying system was as follows:

So, when I heard about this book club it really did tick all the boxes: new books turning up monthly, returning books once we've finished with them, reusable packaging, and best of all zero effort from yours truly. I can just put his age, likes, dislikes and books he's read into the system and then forget about it, because they choose the books for you.

I spent five minutes tops doing that, while Billy tried to force feed earplugs to the cat, then I forgot about it. So when "Mrs Postman" (yep!) brought our delivery it was a really cool sort-of surprise. A personalised box with his name writ large was torn open in seconds, this was what was inside:

Pretty awesome! Before we even get to the books, there's a bookmark to colour, a 'newspaper' with stories about the Land of the Bookabees, a craft activity - a cheeky monkey mask to colour in and wear that ACTUALLY CAME WITH THE STRING (my heart sank when I first saw it, I threw away all the string when he started crawling and the whole house was apparently a maze of death) And best of all STICKERS. I don't know about you, but in my house stickers are actual currency.

All of this came along with three books that we have really loved. On The Moon has opened up a whole new world of imagination, until we read this Bill was a big Moon fan but hadn't ever come across the idea that it was more than a blob in the sky (Adorable mispronunciation of "croissant moon" as opposed to crescent is still encouraged) This isn't so much a story as a set of simple, well thought out facts and illustrations about astronauts and the moon. It's been a huge hit.

Mr Mustachio has also been a win. Essentially the story of a Shoreditch hipster who loses his facial tackle, then replaces it with found objects. It has counting woven into the story, but it's the illustrations that have been a big selling point too. Really fun, even on the 10,000th read.

We haven't got to the Aerodynamics of Biscuits yet, but then we have 6 more weeks to play with the books before we send them back, and in that time we will have had another delivery of new books! Oh and when you send them back (included in the subscription) you can just use the packaging the last set of books came in.

Recycling? YES. Reading? BIG YES. New books every month? ME PLEASE. I'm all in. Billy's all in. I might even let him feed more earplugs to the cat so I can choose the books he gets next month...

Quote of the day

Sometimes, I've believed as many as six impossible things before breakfast. 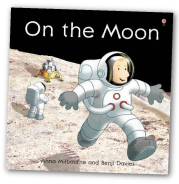 On The Moon
by Anna Milbourne 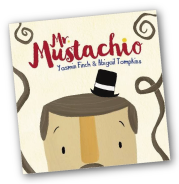 Lets young children glimpse what it would be like to fly into outer space, walk on the moon, and look back at Earth from a very long way away.

Includes fun puzzles to complete after the story

Mr Mustachio has the most fantabulous moustache, of which he is very proud. But one day an impromptu picnic in the park leads to a moustache disaster!

Mr Mustachio is a fantastic debut for both author and illustrator. A quirky story about a ridiculously long moustache and a hilarious solution to an unusual problem. Bold design and a clever colour palette really makes this book special.

Captain Sneaky McSqueaky and his crew of pirate mice are trying to fly to the moon to steal moon cheese, but to get there they need some help from Oliver and his biscuits.

A quirky story for children with big imaginations. Clare is a first time author but has already made a big impression gaining a Silver Medal in the Greenhouse Funny Prize.